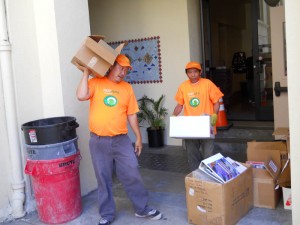 Most people think our job as junk haulers is pretty simple and straightforward: they call us, we bring a truck, load it up with their junk and trash and then we’re on our way. While this is certainly not rocket science, there are actually a few more things we have to pay attention to each time, as each job may present its own set of challenges.

For example a few years ago, when Fast Haul was still a young business, we experienced a problem with a “sensitive” Oakland junk hauling job. We were called out for a job at a residence where a parent had passed away. The children called us out to haul away all the junk and useless trash this person had accumulated over the years as well as what they presented as “usable furniture”. When they initially contacted us they told us it was only a small amount of stuff and that one truck would be more than enough; one of the things we’ve learned since then is that customers usually tend to underestimate the amount of space junk and trash takes. This was the case as well, and even though we brought our biggest truck, we were going to have a hard time completing the job in one truck load as initially planned. Because we didn’t want to intrude longer than necessary we tried to be efficient, and in order to be able to fit it all in one truck load, we broke down some of the furniture.

Unfortunately, this caused some serious emotional distress to the customers. What I did not realize at the time is how sensitive an emotionally charged situation is. To them, watching my guys break down the furniture was very painful, as most of these items were attached to some fond memories they had of their recently deceased parent; they felt it was very disrespectful, while all we tried to do was to be efficient and be on our way as quickly as possible so we would not be intruding more than necessary. Also, the furniture was very old and in poor condition, so much in fact that it could have never been re-used. This is something else we realized with experience: customers often think the old furniture they don’t want anymore is still good to be re-used, but places like Goodwill will actually refuse to take it if they don’t meet a certain quality standard. So most of the time, it’s better for us to just break it down and bring it to the dump site instead of trying to salvage it, and we’ve gotten good to appraise this sort of things. But it is always hard for customers to watch us break things they might be emotionally attached to, even if they don’t want to keep it anymore, which is why we are trying to be more discreet about it these days.

Since that day, I have initiated sensitivity training for all Fast Haul workers. Basically it is some sort of role play, which involves having two employees putting themselves in the place of the customers to see how they would feel in a situation like this. Of course in this kind of situation it is very important to handle all the materials with care and to let the customer know that we will do our very best to recycle and donate as much of their materials as possible.