Trash removal and Prop A in San Francisco

Trash removal and Prop A in San Francisco

You’ve all seen the billboards. That is, if you live near San Francisco. Giant green and blue garbage cans and a great big message to vote “No on Prop A.”
The politics of ecology and waste removal can get pretty confusing. This week, I’m going to take a little time to talk through Prop A. What are the benefits and drawbacks? Which way should you vote when this issue appears on the ballot? 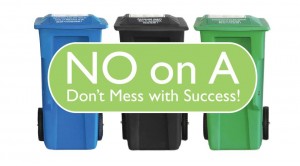 San Francisco’s garbage, recycling, and compost is all handled by a single company called Recology. If you’re a resident, you will be familiar with the site of their white and green trucks. Since the 1930’s, the city’s waste disposal contract has been held by a single company. Although the monopoly has changed hands, it has never been split amongst various bidders.
Normally, local governments would have various companies bid for contracts of this nature. San Francisco works this way for most local services, and our neighboring cities work this way for garbage and recycling. It’s easy to see why: you can generally save money by shopping around for the best deal.
Proposition A would make several changes to the way San Francisco handles its garbage. The biggest aspect would be dissolving Recology’s local monopoly. Now you understand why Recology has funded the advertising against Prop A–they stand to lose a chunk of their business.
The ballot measure seems like a clear win for taxpayers. If the city is able to allow bidding for such large contracts, in theory they should be able to pay considerably less to the companies who win those bids.

There is, however, a significant amount of resistance to the ballot measure for a few reasons.
Just to get it out of the way, it’s worth noting that Recology is a big company and a large political donor. Politicians generally hesitate to side against companies of this nature.
Aside from that, there are some issues that are important to us as residents:

Even though we are a small San Francisco junk hauling company, I’ll leave it up to you to decide how to vote when the issue comes up on the ballot. Hopefully I’ve helped you understand the issue, and you can make an informed decision.