There’s a little place in Golden Gate Park that you might not know about. It’s not very far into the park, like the polo fields. And it’s not tucked away like Strawberry Hill. In fact, it’s right next to Kezar stadium. And as a San Francisco junk hauling company, it’s of special interest to us as locals and recyclers. 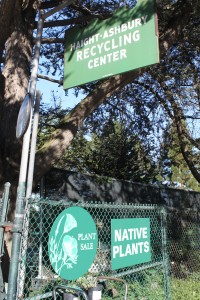 The Haight Ashbury Neighborhood Council recycling center has an extremely endearing acronym; folks in the Haight refer to it as HANC–which to me sounds like a really nice guy. HANC is truly a neighborhood gathering place. As well as servicing recycling needs for The Haight, it also houses native plant life in the form of Kezar Gardens. HANC uses proceeds from the recycling center to fund community programs.

Well, here’s the rub. HANC has been involved in a protracted legal battle. Although it has been around for nearly 40 years, HANC has spent the last 5 years fighting off an eviction notice from the city. It’s a pretty polarizing debate. Some residents of the Haight are fighting the center’s eviction, while others support it. Even Danny Glover has weighed in on the issue.

The big elephant in the room here is obviously the city’s homeless folks. They use the donation of recyclables as a legal way of making money, and they are a big part of the Center’s clientele. Fingers have been pointed, indicating that the Center’s detractors just don’t want to have a site that attracts the city’s homeless in their neighborhood. The entire debate is just as messy as it sounds.

It seems that the fight might be coming to an end, and HANC may have lost. A state appeals court refused to block the city’s order to evict the Center. Although HANC may seek action in higher courts, the probability of success for such an action is pretty debatable. If you’re interested in the process and want to learn more, head over to HANC’s website where you can find out about local meetings.