What’s under your sink, flies through the air, and cleans up after your dog? If you guessed Supersponge Man, you’re kind of crazy. It’s the plastic bag.
And thankfully, plastic bag usage has been curbed in California. Plastic is a huge source of pollution in America, and plastic bags are one of the biggest offenders. San Francisco and Los Angeles – as well as many outlying cities like Santa Cruz – have launched successful bans on plastic bags. Now lawmakers are setting their sights on another big offender in the war on the environment: the plastic water bottle. 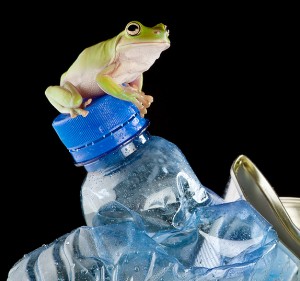 If you ask us, this is a bit of a no-brainer. San Francisco has some of the cleanest, best tasting tap water in the country. It has been said that tap water is more highly-regulated than bottled water. The idea that you’re getting something special from the bottle is simply untrue as it has been reported several times.
San Francisco Board of Supervisors President David Chiu introduced legislation in June that would require new buildings in the City to build water fountains with bottle-filling spouts. Many folks are concerned about sanitary issues related to drinking from a water fountain, and those concerns are allayed by the ability to refill a bottle from a tap.
Chiu mentioned that he has considered other options, such as an outright ban on plastic water bottles in the city. A ban might face strong opposition from opponents, and certainly from the bottled water industry; and to be fair, there are some valid arguments such as the fact that banning bottled water would be eliminating one of the healthier options in places selling bottled beverages. Progress is generally slow in these battles, but we’re encouraged by this change. A billion plastic water bottles are dumped into landfills in California each year. It’s hard to even put that staggering number into perspective; it was part of a little Infographic on Interesting Recycling Facts we created a while ago.

When we can, we always recycle plastics. But as the saying goes, we all need to reduce and reuse before we recycle. Eliminating the use of plastic water bottles altogether would be a great reduction and a wonderful step forward.