eWaste and the Green Apple

eWaste and the Green Apple

There are two precise moments that make or break your environmental impact: When you go to buy something, and when you go to throw it away. I’ve talked before on this blog about buying things wisely to avoid waste. And since we’re in the green hauling business, we also think a lot about what to do with things once we’re done with them. 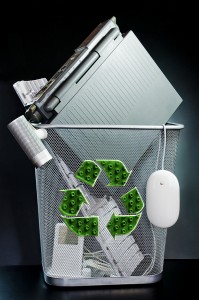 Consider that companies and manufacturers are presented with exactly these moments as well. When they build a product, they decide for the life of the product how much of an impact it will have. And this is especially true for electronics.
This is why, in 2001, EPEAT was drafted. A rating system for the environmental impact of electronics, EPEAT scores products from the beginning to the end of their life cycle. Many major consumer electronic companies are members of EPEAT. Daily Finance has a good breakdown of just how green these companies are.

Apple recently sent shockwaves through the tech world by dropping all of their major appliances from EPEAT. Industry analysts presumed that this was because of the new Macbook’s design, which permanently affixes the battery and RAM to the machine. Thus, it is impossible to upgrade and harder to recycle.
Silicon Valley responded to Apple’s actions. The City of San Francisco claimed that it would no longer purchase Apple products with city funding. Other organization and city governments followed suit. In a rare instance of course correction, Apple publicly admitted its mistake and placed all of its products back on the EPEAT list.

Now, in some ways this is a good thing. If Apple were no longer a member of EPEAT, a system that Apple helped to create, it could indicate to other tech companies that being green simply isn’t very important. But consider also that Apple did not suggest it would be changing any product designs to meet EPEAT regulations. Instead, it simply decided that the very same products that likely make it ineligible for EPEAT were probably good enough.
I would suggest to anyone buying new electronics to consider that no matter how green a device claims to be, it will always be greener not to buy it. Consider products that can be upgraded and therefore last longer. I have used the same Desktop PC for the past 5 years, and it is still a very capable machine through periodical upgrades. In short, keep in mind that standards for environmental manufacturing are great, but your own common sense is an even more powerful tool for the environment.