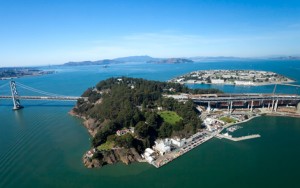 When a story comes to light that involves hauling, disposal, and dangerous radiation levels, it will always be of interest to us. And when it’s something that happens so local to San Francisco, you’ve really got our attention.

San Francisco’s plan to build high-rise house for 20,000 people on Treasure Island has just become a lot more interesting. According to NBC, a recent US Navy report discloses the presence of radiation on the island that had been previously undiscovered. Immediately, the state pressed the Navy (who currently owns much of Treasure Island) to reveal the source of the radiation.

So here’s the fascinating part: the Navy had used Treasure Island to repair, tear down, recycle and incinerate material from ships that had been exposed to 1940s era atomic testing. Navy contractors have dug up 16,000 cubic yards of construction debris with dangerously high radiation levels. Removal is underway, and 1,000 truckloads of radioactive material have already left the island.

The Navy had, until recently, been tight-lipped about their use of Treasure Island years ago. The information certainly might have affected residents’ decisions to live near the waste and dismantling sites. However, San Francisco Mayor Ed Lee claims that these new discoveries will not delay construction plans on the island. The city still plans to purchase the land from the Navy and build the $1.5 billion development.

The Navy claims that radiation levels have been overstated and that they remain committed to the safety of Treasure Island. Although residents are understandably affected by the idea that their island was once used to house and wash radiation-soaked vessels.

Safe and responsible construction debris removal is always a tricky topic. We hope that the city and the Navy respond carefully and responsibly to the situation.