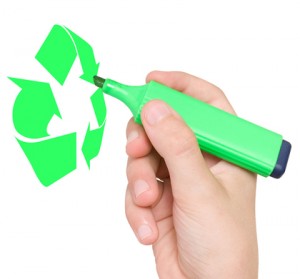 I’m always excited to hear about situations where big ideas started locally and created meaningful change. That’s why I’m so proud of the students of Sun Valley Middle School here in San Rafael. They noticed that they were creating excess waste and decided to approach the problem directly.

Earlier this year, the students and the aptly-named Mr. Land (Land Wilson, the leader of the school’s Green Team) took on the issue of marker waste. Markers, specifically Crayola, can only be used until the ink has run dry. At that point, it simply becomes more plastic waste. Crayola spokespeople have recommended recycling only the caps of their makers. They claim that removing the ink tub and nib (in order to recycle the body of the marker) creates small parts that present a choking hazard.
In almost all cases, there are greener options than recycling. But short of creating refillable markers, having a way to recycle them would be a great step forward. Sun Valley students recognized this and took action, calling on Crayola to provide a way to recycle all of the plastic that they produce. The students created a petition on change.org and gathered a whopping 82,718 signatures.

Recently, the makers of Prang Art Markers picked up the torch where Crayola dropped it. Dixon Ticoderoga, maker of Prang markers, has put in place a system whereby customers can send in their markers for free to be reused. CEO Timothy Gomez applauded the students for creating change on a major scale.

Let’s hope Crayola hears of this decision and follows suit. After all, in this situation it was truly the kids who made their mark!