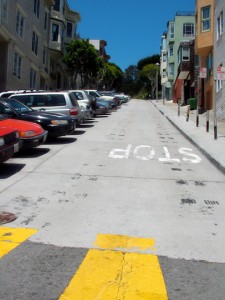 What’s better than finding a parking spot? How about finding a place to sit, have a cup of coffee, read the paper, and meet your neighbors? With San Francisco’s highly-praised parklet program, this is exactly what you can do.

The two-year old program called Pavement to Parks allows San Francisco businesses and residents to propose parklet designs to the city. And the city has found a clever way to reduce bureaucracy, red tape, and excessive time from proposal to parklet: they let citizens build the parklets themselves.

Building a parklet can be expensive. Costs, including permits and construction, can run up to $20,000. There’s an additional rental fee of $200 that is paid to the city. Businesses sometimes go to Kickstarter, or other creative funding sources to create a park.

Some parklets are seating areas for cafes, others are small displays of art. But all parklets are public spaces and work to encourage foot traffic and neighborhood participation. They also encourage people to slow down and support local businesses.

KTVU ran a story recently expressing some backlash at the parklet system. The disappointed people that they interviewed were those who claimed there was already too little parking in the city. At the last count, there were 441,541 parking spaces in San Francisco. Currently there are proposals for 70 parklets. That’s hardly a number that ought to concern drivers. Also consider that the folks that they interviewed were coming in from San Jose and Walnut Creek. There is a CalTrain station in San Jose and a BART station in Walnut Creek–perhaps they should consider public transportation.

The parklet system is about more than reducing places to park and replacing them with places to sit. It’s about changing the way we think about our city–not as places to drive through, but places to live in. Foot traffic is healthier, more sustainable, and better for local business. Have a seat!