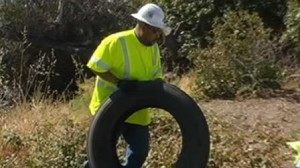 Last week, as part of the 10th annual Litter Cleanup and Enforcement Day, Caltrans and California Highway Patrol crews took part in a trash removal project aimed at some of the Bay Area’s most littered highways. About 40 crew members worked at 4 different locations during the one-day event to show local residents, as Caltrans spokesperson Adam Priest said, “(trash buildup on highways) is an issue we need to bring attention to.”
The first cleanup site was highway 101 in San Jose, one of the longest and most trafficked roadways in California. Dozens of bags of litter, spare tires, and other various items between highway 280 and highway 237 were hauled away. The second site took place farther north on the highway, with crews cleaning up between the Sierra Point Parkway exit in Brisbane and the Candlestick Park exit in San Francisco.
In the East Bay, Doolittle Drive in Oakland was targeted. Crews focused on the areas between Island Drive in Alameda and Hegenberger Road, an area known for having a significant amount of litter. The junk hauling crews tackled the area before moving on the fourth and final location in Marin County. Highway 101 was once again visited, between Tiburon Boulevard and Tamalpais Drive in Corte Madera and over the Alto Hill.
At the end of the day, hundreds of bags of litter were hauled off, making the day a success for Caltrans. In addition to major cleanup days like these, smaller cleanups happen quarterly as well. For more information about the program, visit www.dot.ca.gov.
Source: http://abclocal.go.com/kgo/story?section=resources/traffic&id=9136940
By: Ethan Malone