Radioactive Junk Hauled into the Ocean 50 Miles from San Francisco

Radioactive Junk Hauled into the Ocean 50 Miles from San Francisco 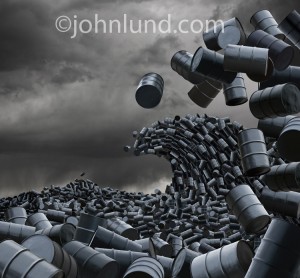 A recent article in the Wall Street Journal reveals some frightening revelations about the problematic legacy left behind from a controversial Cold War-era program that allowed for the dumping of steel drums containing atomic waste into coastal waters.  Of the estimated 110,000 barrels dumped, roughly 47,000 are believed to have been hauled to a single location roughly 50 miles offshore from San Francisco and the Bay Area, in a location near the Farallon Islands. A study of areas surrounding the dump site done in 1991 revealed “a radioactive decay product of plutonium, in some fish samples from the site as well as a comparison area about 60 miles away”.

The potential health effects of such materials in fisheries located so close to a major metropolitan area is of obvious concern, especially given the potential for further corrosion of the steel barrels over time, and consequent leakage of additional radioactive materials. Further complicating the issue is the difficult nature of locating the barrels on the ocean floor, given the strong underwater currents and movement of sediment in the last 50+ years. In fact out of over 11,000 photos taken in a 1960’s survey of the dump sites in the Atlantic and Pacific, not a single waste drum was located.

Thankfully, the practice of dumping radioactive waste into our oceans has been halted, but the overriding issues of what to do with the ever-increasing quantities of waste created by our industrialized societies remains. Here at Fast Haul, we make every effort to recycle as high of a percentage of the items we pick up as possible, and we encourage all of our customers and friends to be mindful of their own personal habits with respect to waste disposal.