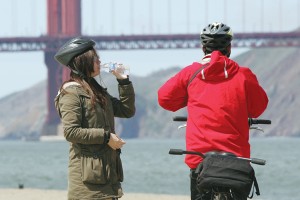 San Francisco continues to stake out new territory as the leader in waste diversion by proposing a ban on the sale of water bottles on public property.  If enacted, this would be among the strictest bottled water bans in the country.  This idea has sparked a debate, with people on both sides weighing in on the potential impact (positive and adverse) of such a bold move.

Who Would be Affected?

The ordinance would apply to any event conducted on public property with 100 or more attendees.   This would not just apply to conventional festivals, but would even extend to mobile food trucks — which would need to offer tap water instead of purveying bottled water, though it would only apply to events with adequate on-site tap water, initially.  That is until late 2016, when it would take affect at all events on San Francisco-owned property.

For annual events, such as Outside Lands which draws 65,000 people, only three refillable tap water stations were available.  This example is but one of the many that mandates that the city thoroughly study how to accommodate water supply demands at such events and prioritize installing water fountains and reusable bottle filling stations.