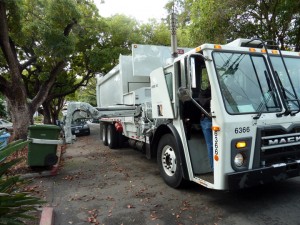 The money is not there in waste collection. That’s what the city of Berkeley has come to realize, as it moves to offset its loss (or projected loss) of nearly $3 million in waste pickup services, by increasing garbage collection rates by 25% coming into effect July 2014. In addition to this, Berkeley residents will notice some new language on their bills; “Zero Waste Services” will replace “Refuse”. According to city officials, they simply weren’t charging enough to cover the associated recycling and compost pickup costs.

In a recent meeting of the City Council of Berkeley, members were given two choices: either increase fees by 24.7%, or, phase in a 35.5 percent increase over three years. City Council members voted to for the former approach. How will this breakdown? Those on the bottom of the food chain (residents using the smallest bins) will see a $3 increase, those with 20-gallon bins, $5, and those using 32-gallon bins will see a $7 increase service.

In addition to mitigating the deficit, funds raised by these increases will help rebuild and improve the transfer station, Materials Recovery Facility, and support recycling outreach and education campaigns.  Notices are scheduled to go out to residents on March 28 and a public hearing is scheduled on May 20.  City spokesman Matthai Chakko wanted to assure residents that Berkeley’s pickup fees are still in line with the average rates of nearby cities. To offset these kinds of cuts in the future, the city is considering cutting back some pickup services, a move that has worked for other cities.

While the City of Berkeley is planning to increase rates, companies like Fast Haul are making their business more competitive, to pick up the slack. Fast Haul’s truck are 15 to 30% larger than their large franchise competition – the old adage of being lean and mean, fits them well. This bodes well, as it lets them keep prices down while taking on more projects and servicing a wider area. This follows good business, as more and more cities in the Bay Area clamp down on the objects that can be collected, recycled, and/or diverted into landfill, in the surge to reach the Zero Waste frontier. See Fast Haul’s rates.