San Francisco Looks Towards Becoming A “Zero-Waste” City by 2020

San Francisco Looks Towards Becoming A “Zero-Waste” City by 2020 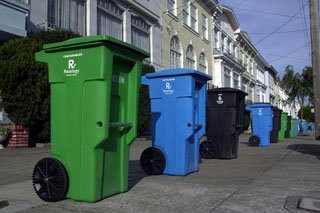 Adding to their long list of groundbreaking waste-reduction measures, the city of San Francisco is looking to see the fruits of their labor culminate with a complete end to all landfill contributions by the year 2020. Though it seems like quite a lofty goal for a modern metropolitan city, SF’s senior Commercial Zero Waste coordinator Jack Macy is confident that it can be reached.

Since 2002, Macy has worked towards getting some of the most progressive waste management legislation passed, including requiring construction waste to be recycled, banning plastic bags from the checkout line in grocery and retail stores, and requiring the separation of food waste and recyclables from trash. Implementing these measures contributes to San Francisco’s 80 percent compost/recycle rate, which more then doubles the national average.

In a recent discussion with Yale Environment 360’s Cheryl Katz, Macy further explained his vision for seeing San Francisco becoming a “zero-waste” city. Macy pointed out that eliminating waste is a two way street, noting “Part of the principle of zero waste is that the local government can’t shoulder all the burden…so it’s important that we encourage consumers to take responsibility for what they buy and producer responsibility for the products they design and market.”

Another fascinating point Macy made during the interview was that changing our current waste/recycling habits requires us to take another look at discarded materials and what we consider waste. Macy believes that there is valuable material in all waste; not only in the material itself, but in the fact that re-using and recycling that waste limits the need to extract, refine, manufacture, and transport raw materials.

While Macy has experienced a significant degree of success reducing overall waste in San Francisco, it doesn’t mean there have not been roadblocks along the way. He identified the residents fear of a so-called “garbage police” checking everyone’s bins and levying fines for infractions. While Macy notes that he wants to be able to enforce the cities rules, fines will always serve as a last resort to offenders.