We are all well aware of the adverse effects the drought has brought upon the state and its residents. A few posts ago, I outlined one of the bigger causes for concern regarding our already depleted water levels, but recently news outlets have identified a new offender in the battle for water: Thieves.

In some of the state’s worst hit areas water has become a valuable commodity, with some people turning to illegal means as a way of acquiring it. Recent investigations have identified criminals operating illegal marijuana grow sites as some of the most prolific water thieves. According to the California Department of Fish and Wildlife’s Marijuana Enforcement Team, these marijuana farms have siphoned 1.2 billion gallons of water from local and public sources. That’s enough water to fill 2,000 Olympic-sized pools! 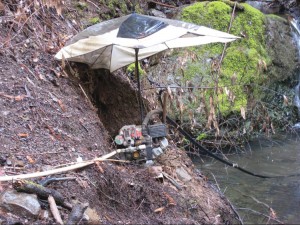 The theft of water doesn’t just impact length of our showers and the extent we can water our plants, it puts local wildlife and vital resources in jeopardy. As a result of the theft by marijuana growers, the population of Salmon found throughout northern California has been put in severe danger.

Humboldt County has seen a couple major cases of water theft in the last several weeks. Criminals were able to steal around 20,000 gallons from a community services district board in the town of Weott. Three weeks later another 20,000 gallons of water were taken from a surplus tank at the Bridgeville Elementary School in Eureka, causing the school to shut down this past Tuesday.

In North San Juan, a small town located along the Sierra Nevada Mountains, thousands of gallons were stolen from a fire station this summer, during the peak of wildfire season. Although it is purely speculation at this point, most residents and authorities in the afore-mentioned areas suspect marijuana farmers to be behind the crimes.

In order to stop these criminals from stealing the states valuable resources, residents need to be dilligent about reporting any suspicious activity and waste. These reports are usually taken by the utilities department of your city or county.